One of the highlights of our trip was exploring Kea with Kea Divers. On our first evening our host Yannis Tzavelakos, showed us the location of his dive school, but the best part was driving there in his Mini Moke, it was just fabulous and actually we got to drive around the island in this cute antique car. Arriving at the dive center which is located close to the harbour of Vourkaki at around sunset, we got to witness the most spectacular sunset setting over the Agios Nikolaos lighthouse. Yiannis definitely has the best office, with a view. After enjoying a chilled glass of wine, we continued our evening at the Aristos Tavern. 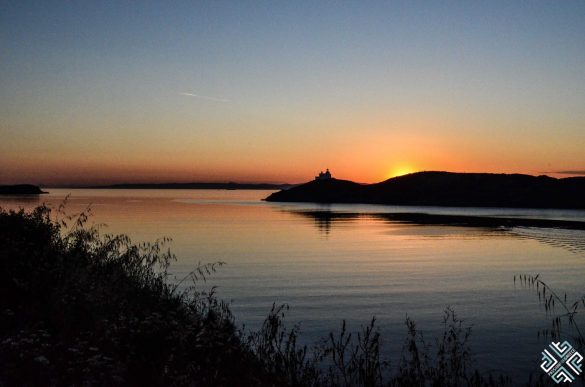 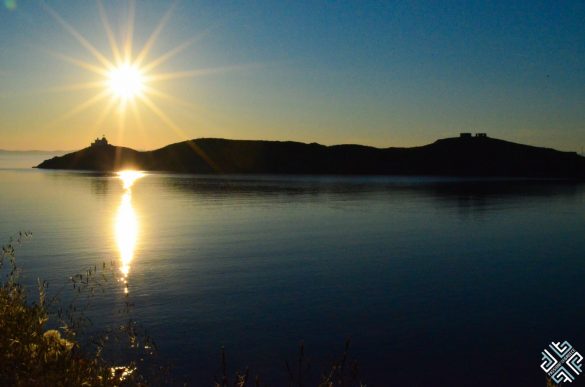 The following day Yannis promised to show us the best of the island from the sea, so 6 of us set out in his rib speedboat for an adventurous day around the island. Although Kea seemed like a small island at first, there are quite a few beaches that can only be reached from the sea. The first stop was the Vroskopos beach, a remote, picturesque beach that has already apparently in possession of a luxury international hotel chain with plans to turn it into a unique destination in a few years from now. One of the girls was going to have her first PADI diving lesson while two other friends of Yannis, were already sunbathing and swimming the moment we anchored the boat. Marissa, my business partner and co-founder of Travel Bloggers Greece and I decided not to plunge into the water, it wasn’t warm enough for us to start our swimming season, so instead we decided to catch a few sunrays and enjoy the calmness of the sea. An hour later we continued with our trip, passing a few other beaches and houses sprawled out around the island. We then arrived to the famous ancient site of Karthea, what once used to be a city founded in the 12th century BC. In the ancient times it was a full functioning city with its own defense system, water supply, mines, as well as its own laws. Today, Karthea can only be accessed by boat or by a donkey and is one of the most popular trekking paths on the island. It takes around 30 minutes driving from the center of the island and then another 40-45 minutes to hike the trail. The site has remained untouched until only a few years back that archaeologists have started to restore this unique site. The ancient city of Karthea houses some of the most interesting monuments which include the doric temple of goddess Athena (late 6th century BC) and the archaic Temple of Pythion Apollo (530 BC).Yannis also explained that once there was a harbour pier that connected the city with Karthea with the tiny islet just across, today this wall is founded lying 3 meters underneath the water. Whether you like to learn how to dive or already know how to dive there are plenty of interesting sites to visit with Yannis and his team. Just 1.5 nautical miles from the northwest point of the island of Kea, lies the wreck of the world famous HMS Britannic, sister ship to the Titanic. The wreck rests at a depth of 120 meters, making it accessible for technical divers only. Of course you can also just enjoy a day out in the sea, snorkelling and swimming in the crystal clear waters. There are more than 20 sandy beaches on the island which can only be access with a boat. Just contact Yannis and he will know what to suggest. Arriving into the harbour The Lagoudera tavern of Kea